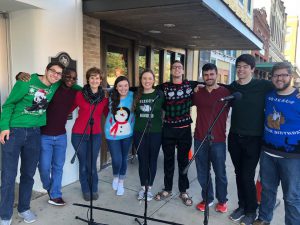 The Texas A&M Century Singers offer a wide repertoire appropriate for many events including commemorative proceedings, memorial services, holiday events, and birthday celebrations. If you have an event coming up and are interested in having the Century Singers perform, contact our Performance Manager, Krissy Elizondo at centurysingerstamu@gmail.com. We will do our best to respond to your request as soon as possible!

Due to safety concerns regarding coronavirus, we will not be having our typical performance schedule. Instead, we will have one combined concert with the Singing Cadets and Women’s Chorus. Performers and audience-members will be masked and placed six feet apart, and the concert will be live-streamed and posted online for anyone to see!

We are excited to have this concert on November 22nd at First Presbyterian Church in Bryan, and we hope to see you there! 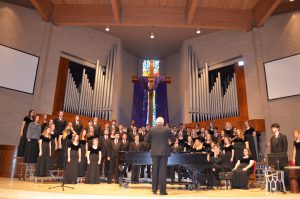 Each fall, the Century Singers and the Women’s Chorus perform a fall concert. This performance contains a range of songs from gospel to classical choir repertoire.

Showcase is a variety show organized entirely by the Century Singers. Our members put on thrilling performances which encompass music from a variety of genres in solos and small ensembles. This concert truly is a showcase of the talent and dedication to music demonstrated by each of our members every day. Each Century Singer gets to express themselves through their chosen piece, and the experience provided by the variety of musical expression is unlike any other! 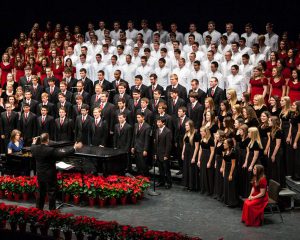 The Holiday Spirit of Aggieland Concert is the Choral Activities’ annual holiday concert. The Century Singers, Singing Cadets, and Women’s Chorus each perform several holiday pieces, ranging from upbeat, complex renditions of famous carols to solemn spiritual pieces that bring holiday spirit to all who attend, both young and old. In addition, each of the choirs combine to sing Handel’s Hallelujah Chorus for a grand finale.

Each year, poinsettia plants are sold prior to the concert for use as stage decoration. Following the concert, the flowers are distributed to the patrons who donated them to the choirs. If you are interested in purchasing a poinsettia for the next Holiday Spirit of Aggieland Concert, contact the Choral Activities Office at (979) 845-5974! 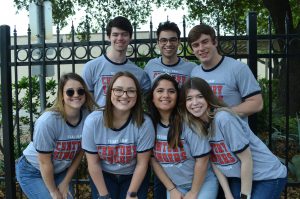 Each Spring, the Century Singers travel within Texas to promote both Texas A&M University and our choir to the area. These tours consist of several performances at venues such as churches, Aggie Mom Clubs, and local high schools. Past tours have taken our members to Dallas, Austin, San Antonio, and Houston. 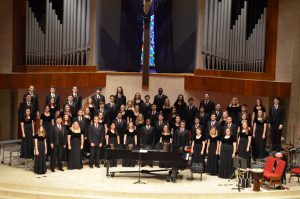 Every year on April 21st, Aggies across the world gather to remember Aggies who have passed within the year. Muster is held worldwide and is often celebrated in different and unique ways. The Century Singers, Women’s Chorus, and Singing Cadets have the honor of opening each on-campus Muster ceremony in Reed Arena with music to honor those who have passed at this “Roll Call for the Absent.” In addition to their respective individual pieces, each of the choirs collaborate to perform Amazing Grace. Century Singers traveled on our first National Tour in the spring of 2017. The purpose of this tour was to showcase the talent of Texas A&M’s premiere mixed choral group to venues across the southern United States, as well as recruit high school students interested in performing choral music in a collegiate setting. This tour started with a visit to Lake Buena Vista, Florida where our members spent several days in Disney World’s parks for a bit of pre-performance fun. While in the parks, we performed at Disney Springs and were awarded our very own Golden Mickey! The rest of our tour was spent performing for churches, high schools, and retirement communities throughout Florida, Alabama, and Texas. 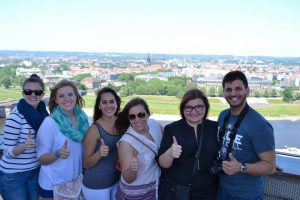 Every three years, Century Singers travels out of Texas either nationally or internationally. The most recent international tour, taken in May 2014, brought the Century Singers to Germany. Concert tours outside of the state have taken us to St. Louis, New York’s Carnegie Hall, Italy, Ireland, the Czech Republic, Austria, England, Canada, Greece, and France.

Copyright 2020 • Century Singers | A Tradition of Choral Excellence • All Rights Reserved. • Hosted by Division of Student Affairs Department of IT